Making Yogurt in my Instant Pot

November 25, 2018
I love my Instant Pot?  One reason is yogurt making.  I decided to record how I do this today for my memory and for others that may want to try it. 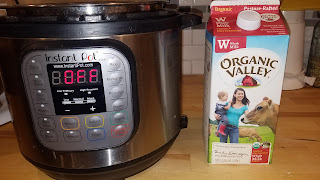 Whole Organic Milk, half gallon
Good plain yogurt, about 2 heaping Tablespoons
Optional:  1 capsule each, Culturelle and Bifido Biotics (or probiotics you like)

Pour the milk in the pot 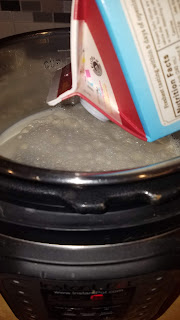 Press the Yogurt button, then press adjust and it should say, Boil. 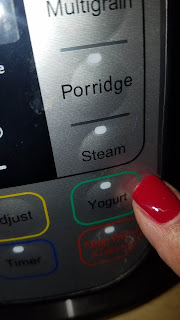 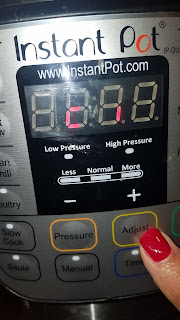 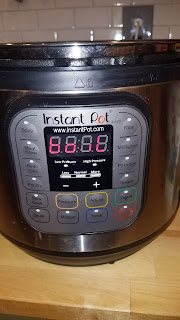 Now you can walk away.  Don't put the lid on.  It will stop when it has reached temperature.  Next is the hard part:
WAIT

Let it cool down.  I let it cool to room temperature and don't give it much thought.  Others recommend checking the temp to between 110 and 115 degrees.  I don't worry about that.  I used to, but have found I often forgot to go back at exactly the right time, and since the pot heats it back to the right temp it still always works.  Then I can knit, watch tv, clean, whatever while I'm waiting and not feel pressured to get back on time.

Now it's cool. In a cup mix your yogurt and the emptied capsule of probiotics.  Pour some of the cooled milk into the cup and stir until smooth.  Pour that into the milk in the pot and gently stir in.
Put the lid on, press the yogurt button again and it will set for 8 hours.
Since I generally start it in the evening, I just go to bed.  You don't have to worry about it until you get up, even if it's more than 8 hours. 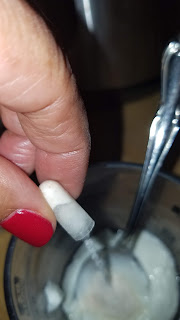 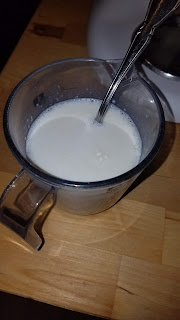 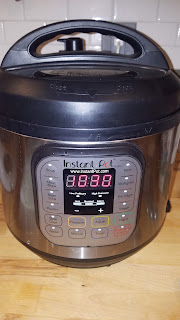 You now have nice creamy yogurt! 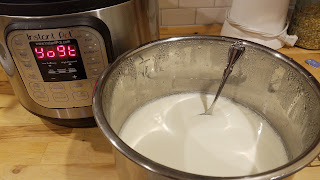 I now go one step further.  I bought a  Greek yogurt maker (actually the Euro Cuisine GY50 Greek Yogurt Maker) on Amazon so I use that.  I put my yogurt into that and set it in the fridge for about 6 hours or longer. 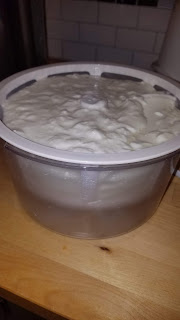 Then I turn the screen portion over on the lid, let the yogurt fall out naturally and it's so nice and thick you can slice it with a knife!

Save a little for the next time you want to make yogurt.  You can put the little jar in the freezer and use it when you want.

September 19, 2019
Have you made a Bucket Bag? I hadn't either so when I saw Stitch Mischief's make-along on Instagram, I wanted to join in!  Now this isn't just any bag. The Finch Bucket Bag is a large project bag that can carry a large amount of yarn, or beach supplies, or even overnight supplies. I fell in ❤️ love.   Here is my finished bag...       Isn't it nice and roomy...              If you want to get the pattern, just click here :. 👜👜 And another thing- I didn't fully understand there were prizes involved with a make along.  And I won! First prize 🥇 really!  This is my prize: Treehouse collection from Figo Fabrics.  Isn't it wonderful fabric! Stay tuned to see what is made with these!
Post a Comment
Read more

June 07, 2016
When I started this blog last week, I had full intention of blogging twice a week about all my sewing adventures!  Well, this happened: Finnigan Foxx L. So little Finn was born and it kind of threw things off around here.  This proud grandma couldn't get things done like normal for a few days, but I do have some fun things going on. On the way home from the birthing center, my DH asked if I wanted to stop at the Habitat for Humanity Restore .  Well, of course!  I have decided to sell my "too big for my room" beautiful Arrow sewing desk.  We found this and it is perfect for my spot! I don't know if you can see, but the top drawer is scalloped and so cute.  I just love vintage, don't you?  I cleaned it up and now I need to make a Sewing Machine Mat for my Janome MC9000.  I think I'll use these and blog about it when I'm actually make it. Next, because I can't stay off Craigslist, I saw this beauty for a very reasonable price.
2 comments
Read more